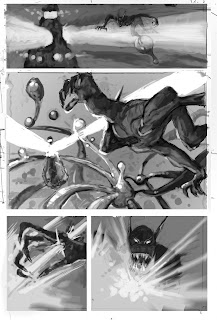 Ellis ... I have an interesting spec I want to do in about four to five pages. It's called "The Amalgamation of Mr. Gray," and it's the story of what happens to a Dorian Grey character when the dilapidated house containing his portrait is set to be "gentrified" by the town counsel wherein it sits. I will get your page rate (so this qualifies at "work for hire" and do the script. Then we can discuss. I have a young filmmaker interested in it as a short film project, so doing a comic book treatment would speed it on its way! ...

Page rate, 100 bucks, the whole publishable deal, soup to nuts. It will be another great sample. The story sounds great.

I'll be making Home Depot part time wages doing something I like.

That link to Jeff's script didn't come through. I did this reply below.
Scripts
Bringing it up to the top post as well.

Will there be any accompanying text? I think that matters because text will lead the eye to look at the panels in a certain order.

I would be tempted to make the frontal view both the top panel AND the largest, but maybe that's more of a rework than you want to tackle.

Whatever you decide I think it will be a great opening. Overall the page is successful in establishing what's happening. I'm just nit-picking.

What do you think looks best Ellis?

I was biased with my first take. But I've gotten used to the new look. It will be having a Title and credit typograhy. So that will be a composition issue as well. I'll try my hand at Hand Lettering for the Title.

BTW: Ellis -- having read the script, it says the Monster's face shows shock. To me the expression on your monster's face is more like anger; brows drawn down. It seems to me that shock would make the eyes go wider, more open ... JMHO.

Tom C. Glad you read the script. And read it closer than me. Sherm Cohen talks about close reading for storyboard artists. How it's one of their major sins. To go off of a quick read that ignores detail like what you're talking about.

I'm going to get a lot done tonight. Want to know why? Because I've been turning it over in my head and I've come up with procedural steps for prepping the art. I love procedural stuff.