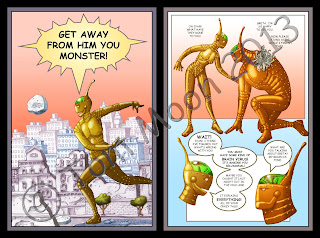 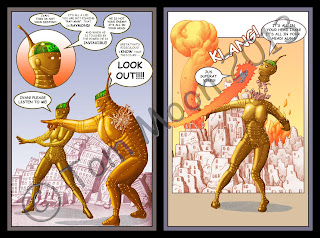 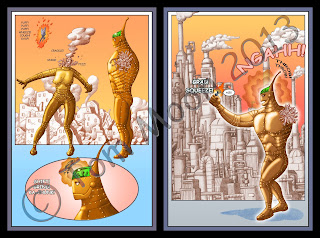 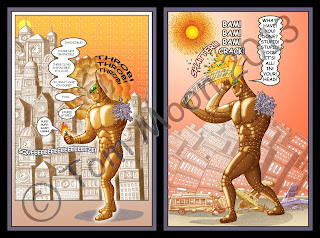 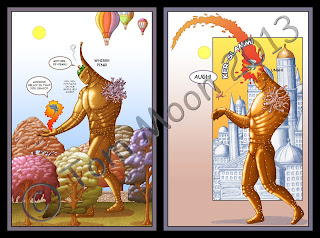 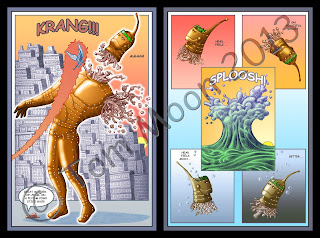 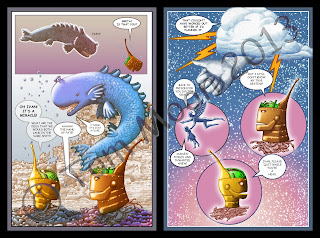 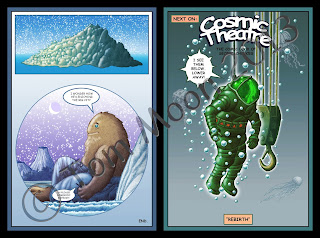 Kidding. Brilliant. "Quit while you're a head" made me laugh. Mission accomplished. Love that last page with the mecha diver.

Ha ha. Now you know why I have to write a second part.

A satisfying finish! How fun!

Man that is dense with things to enjoy.
King Kong with the prank blue jeans still on.
The great morphing backgrounds as he goes through his THROBBING head crisis.
I like that God approves.
Awesome work.

The ending was everything I would have hoped for: Sublime! Definitely want to hold this in my grubby mitts, Tom. Congratulations!

Thanks guys! Really glad you liked it. Anxious to turn out more.

Ronnie, being a fellow Carl Barks fan I think you will appreciate this. While creating this comic I kept thinking about the series of "Mastery" tales that Barks wrote for Donald Duck. All the stories where ever-earnest Donald tries his hand at various occupations: moving man, rain-making, wrecking, watch repairman. Each time he is briefly successful until the end when he makes some horrible mistake while doing the most important job of his career. The stories usually ended with Donald being chased out of town.

I think failure is so interesting.

Donald, as written and drawn by The Duck Man, has always been his own worst enemy. Maybe that's why I relate to him so well. We seem to operate from the same playbook.

Failure endings (non-soul crushing failures, that is) are far more satisfying than happy endings - shows more 'humanity' than a idealized happy ending (which is usually dry and boring).

Just love the sublime in this tale, Tom. Kind of get a Jim Woodring vibe as well (and that's a compliment).

Ronnie, you're famous in my head for a particular thing you said a long time ago. We must have been talking about how superior Barks stories were to other run-of-the-mill comic stories. You said that they were good because they "commented on the human condition". I've always remembered that phrase.

Yes, this is amazing stuff. And so great to have the "failure" ending. The Carl Barks angle is illuminating.

The Raymond character is a brilliant play on the Superman type. Also, that heart-wrenching decapitation of Greta--and yet handled with such a delicate touch.

And such gorgeous visuals thru-out. Love when the characters spring into action in the last two installments--a new visual wrinkle after so much "graceful repose." And yet the action fits the style (as opposed to lapsing into cliched comic book fight poses).

Yeah, totally fantastic. This is something that needs to be published--and for the very best reason: because the world needs to see it!!

BRAVO MOON!! I want mine in the deluxe hard cover edition.

Thanks Marty. High praise coming from the creator of "The Teen Ellis" and "Li'l Okie Ellis".

I'm totally on the same page as Marty... the world NEEDS to see this in print. I also agree about the last page diver. Way cool effort!

Hey Rick, speaking of things that the world needs to see, you've hinted for a while about the return of "Dorothy and the Flying Emporium". (What's the true and full title?) Looking forward to hearing more about this. When will you grace these pages with the return of Dorothy?

I don't know if I'm going to keep all of the other stuff or not ("and the Fantastic Flying Discount Department Store"). The story in my head separates Dorothy from the Store at some point down the road, so I don't know if I should keep it for a time and then drop it later or just lose it now and be done with it.

I have a bunch of thumbnails and scribbled dialog. I have about a standard issue and a half of comic in that form... I'm not sure how I want to go about publishing it. Currently I think I'm going to shoot for 100 page graphic novel... If I can finish that before the next con it will be a miracle, but it would also be awesome to have a good sized book ready to go. I'm producing it as though it were a 33 page comic in case I change my mind and want to go that route.

Once I get some of the thumbnails scanned I'll share them.

Rick You'd be perfect for something like this
You've already honed your gag writing. You're great at looping animation. Dorothy is coming out of whole cloth in your head at this point. Audiences actually like to construct characters they don't know from clues.
Make a tumblr for Dorothy and see if you like animating gifs.
They don't all have to animated.
Drop in the liveliest notions wherever you like.

And of course I'm talking to you , telling you to do something I've had on my mind to do.

Also note. Almost 11 thousand "notes."
Meaning LIKED or REBLOGGED. Meaning 4 or 5 times that many people saw it.
The audience. Every artist wants one.

I'd recommend Buncake do the same thing to Cork. He's good with photoshop. He could do gifs.

I put this back on top. I didn't want anyone to miss my great comments.

Great suggestion Ellis! Sadly, if I spent time on that I wouldn't ever make progress on my actual comic.

Sometimes I think the availability of all this technology, which ideally should aid our creativity, ends up getting in the way of creativity. We spend so much time trying to learn the next cool tool we don't have time for getting to the heart of the matter.

Tom, I can't even get close on the technology...I'm still trying to learn how to ink with a crow quill.