Phoenix Jones is on patrol!

Seattle is the best because we have real Super Heroes! 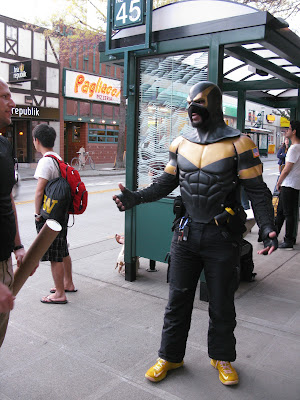 The link stalls for me about a quarter way into loading.
Maybe they prohibit hot links.

As long as he doesn't push kids around when Mom won't pay for the picture. That's probably a NY Superhero problem.

Anti OWS types. He is a hero

I changed your display picture to a Thumbnail generated bt Blogspot. But the link to the picture gives you the high rez version. Same effect, faster load time.

Hey Rick. Since you're likely to read comments here. Don't buy the Manga Studio for Dummies.

The youtube videos by the guy that wrote it are the way to teach yourself.

This guy, Benjamin Fodor, is an amateur MMA fighter. He really is built like a superhero under that costume:
http://en.wikipedia.org/wiki/Phoenix_Jones

No doubt a tough and skilled guy.

Sounds alright as long as he doesn't behave like he has anything but a citizen's sanction. I sound like J Jonah Jameson.

Thanks for the heads up on MS for Dummies. I'll check out those videos.

Phoenix Jones is a fairly well prepared guy... he carries pepper spray and a taser and, as Tom points out, is an experienced fighter.

In thinking about this earlier today, I recalled that it's not unusual to see in Austin, TX t-shirts and bumper stickers imploring residents to "Keep Austin Weird". You don't see that sort of thing in Seattle because there's no danger of it being anything other than weird.

What's funny about the news reports and cops discussing the local "Superheroes" is that they don't talk as though that word has quotation marks around it. They use the term as though they are actually characters in a Spiderman movie talking about actual superheroes.