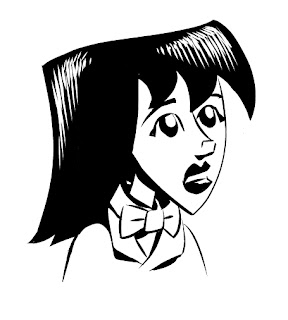 I've had Manga Studio for a while but haven't really played with it at all.  If I can figure out the brush control this might work out as a better comic tool than PS.  This is only an early test... I'm hoping to get more control and a juicier line with practice.  Also, I'm not so keen on the hair highlights... I've been playing with it a lot and still haven't found something suitable. 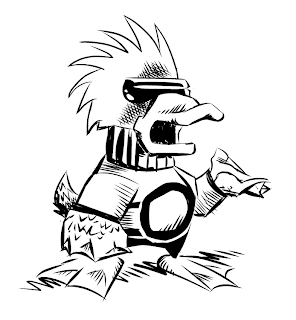 More fiddling.  It takes some getting used to... still hoping I can get a handle on making some more juicy lines, but I have a feeling that this will only come with sustained effort... like working on some big project!
What I do like a lot is that I can use the same tool for drawing and erasing.  Also, when all is said and done, I'm way happier with the line quality in Manga Studio than in PS.
Posted by MrGoodson2 at 8:40 PM

Looks very sharp. I like it. I also have manga studio and never use it. I've decide I want Illustrator to be my inking tool if I ever decide I need that crisp line the vector tools produce.

Hope you get into it and show us how it's done. Your friend is youtube on the how tos.

Sweet work, Rick. Her hair has an almost scratchboard quality to it, which I particularly like.

I really dig Manga Studio's brushes. I haven't used Illustrator in years, but I've found Inkscape to be a pretty good replacement. Inkscape has some pretty flexible brush tools and you can't beat the price (free).

This guy is worrying the highlights to death

Rick! She almost looks like a woodblock...and I agree--those hair hi-lights look like they could have been put there with an awl!

I guess I should also say that I'm drawing and erasing all in MS... I haven't brought in any scanned sketches yet. I expect that the drawing quality will improve once I have something better to start out with.

Hey, isn't that Dorothy of the Flying Emporium and an alien duck invader, or something like that?

Looks like a good tool for you. Has to be better line sharpness than PS. Scalable and all that.

If you watch Doug T on the youtube video where he talks about using Manga Studio, you can tell he's doing several things "wrong."

But it's a tool designed to be used by an artist. So Doug goes ahead and inks 500 pages of graphic novels without bothering to find out how to do it "right."