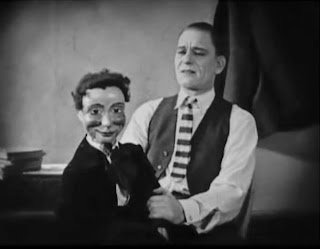 Bunch more grabs on my Tumblr Fun flick. Most chilling moment was the midget and Victor McLaglen (Hercules) laughing it up about killing a rich guy that begged for mercy. The midget really thought it was funny. It also features a giant chimp. They use misdirection and have kids in scaled down costumes to sell the giant chimp. They don't do it as well as this video from the silent Thief of Baghdad I added the how it was done info as an update to the clip. Because the only reason I posted the clip was the awe I felt for the size of the chimp.
Posted by MrGoodson2 at 9:10 PM

That midget is TINY! And was Victor McLaglen ever that young (completely forgot he was the strong man). I thought Chaney in drag looked and acted uncannily like Steve Martin.

I need to do a Friday Film Frame for THIS movie!

(I'm sorry you weren't more impressed with the ape, El. My standards must be slipping....)

I was impressed. I liked the slow mo that made him more massive. I like the matte shots. The kids dressed as adults. He was a real menace.

Harry Earles as the midget, Tweedle Dee, he's the winner as the most evil. Peeing his pants in glee remembering the rich guy begging for his life. Pantomiming the begging actions. Good shock. McLaglen did the circuit making money selling commemorative photo keepsakes just like depicted in the movie. Weird syncronicity, I reacted to a Tumblr post of McLaglen that I went to immediately after my post.