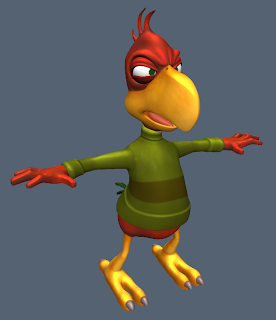 I painted the maquette in 3DCoat  for a basic color breakdown that will be a guide for the final material set-up in Messiah. Still playing around/learning Messiah's material system which is quite powerful. It's node-based, has awesome procedurals and, as the Doll Eyes tests show, is really fast and fun to use. I've gotten some interesting results using displacement in Messiah and I will probably rely on that for wrinkles, furrowed brows, etc.
I've also retopologised the mesh so that it can be animated properly. 3DCoat has probably the best retop tools I've ever used and it was relatively quick to rebuild the sculpt. The whole build took about day-and-a-half. 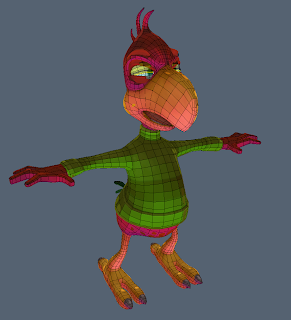 And lastly, I'm beginning to develop rigging strategies for the head using a combination of morphs and bones. Have to say that Messiah really shines in this department. Rigging is relatively easy and non-destructive. You can make a ton of tweaks without having to start completely over. Still, this is a test rig and I will probably have to make some changes to both the mesh and rig before I can really sit down and animate the character. The current upper eyelid mesh set-up does not accommodate extreme positions as well as I would like, but that's the whole point of testing. I'll make some changes and fix the problem. 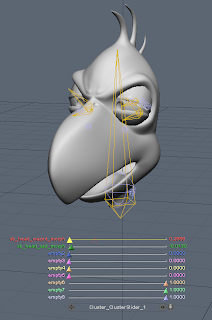 Anyway, have a great Tuesday, everybody! Cheers!
Posted by MrGoodson2 at 7:42 AM

Great work Ronnie. I think you got things to the point you have to do a short. Model looks great. Ought to deform very well

And morph targets sound like a great idea. Don't get lost in a tech rabbit hole. It can always be more sophisticated. Couple of extremes and attitudes and you can probably get some attitude and plenty of storytelling.

Thanks, Ellis. I'm pretty happy with how he looks now. Going to make sure I can deform him correctly, then I'm calling it good. Gotta flesh out the story, such as it is.

I'm eager to know how he moves and speaks. In a surly fashion I would imagine.

I see him as mainly mute, Tom. If he did speak, I would imagine his voice would be somewhere in the vicinity of George C. Scott.

You've GOT to animate him giving the "Patton" speech!

"I want you to remember... that no bastard ever won a war... by dying for his country. He won it by making the OTHER poor, dumb, bastard die for HIS country."

We're gonna go through them like crap through a goose!

Great use of sound files. Do your animations inspired by the sound tracks. It was a staple of a couple of the heavy iron guys in down times to animate their rigged , Pixar based , characters in that way. Mr Incredible doing Pulp Fiction acting and monologues.

And dress him up in full uniform!

Hey, this one has the video part too! http://www.youtube.com/watch?v=YlzIPoRbF_A