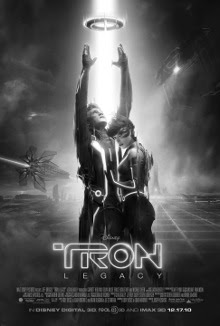 Tron had too many beats.
Posted by MrGoodson2 at 12:27 PM

Just watched it this past weekend and I feel exactly the same, Ellis. Looked great but was flat as a pancake in story and characterization. Kept waiting for it to get interesting or 'good' and it never happened. Digitally young Jeff Bridges looked great in stills but not so-great in motion: Very reanimated corpse-ish and not at all convincing.

Yes, young Bridges was still uncanny. They would have been better off getting a young man that nearly looked like Bridges back in the day, doing a little make up job and then re dubbing him with Bridges voice. Putting the voice in a higher register maybe.
Removing forehead wrinkles doesn't make you young. They left behind a hundred, "gravity at work" effects on the face.
And hair when it gets old really loses life. They used an old man's hair. One of the things I remember most about a young Bridges is that unruly, springy, blonde mop. All fixed by finding a surfer dud that looked like young Bridges and letting him double.

And probably would have saved a few million in dollars.

The main character knew too much and was too comfortable in the Tron world. We didn't get to ride with him through his POV, make mistakes and learn through them. After every sequence and at the end of a movie I try to as this question,"what did you feel??" I felt nothing.

Also the sountrack mimicked the movie. Boring. I like Daft Punk but I described the soundtrack to a friend like driving in the middle of the night on a highway and just looking at the yellow stripes coming toward you.

The Game grid stuff was impressive when there was a wreck.

The first Tron, as I remember, felt like your mind was trying to rationalize being in cyberspace. Legacy was just a weird future world. My wife and I watched it and both fell asleep. We thought we must have been really tired. Our daughter told us, "No. It was just a boring movie."