One of art's true giants,
Jeffrey Catherine Jones,
passed away early this
morning. She leaves
behind a jaw-dropping
body of work, images of
which she so graciously
shared on Facebook.
I loved the comment
one of her friends posted:
God must need some art lessons. 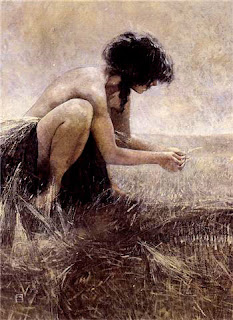 Very sad. One of the things I missed about facebook most was Jone's regular postings. There is a film on Jone's life in the works I believe.

Yes, I've had the film's site bookmarked for a couple of years now ... it includes an interview with the filmmaker ... but still don't see a date when it'll be released.
http://macabfilms.wordpress.com/

Yes, Brent Anderson posted some kind comments about Jones on facebook, as did Dana and Doug.

I spoke to Jones briefly at some early con's, and wasn't alone in being rewarded with patience and encouragement. The book I most enjoy remains the Jeffrey Jones Sketchbook authored by George Pratt and J. David Spurlock. Besides the artwork, it's Pratt (also a person and artist to admire) interviewing Jones about art etc. I found it truly insightful.

A person leaving behind that much goodwill and good work when they check out = quite an inspiring feat.

My only interaction with JCJ was through e-mail about a year and a half ago, when he was already a she ... but for some reason, that seems irrelevant. I think (s)he encompassed, or rather, transcended gender ... just as her art does. Divine Art.

What strikes me as most relevant (and consistent with what I hear from others) is that JCJ was always willing to take the time; to give you her full attention. She was genuinely kind and encouraging to me, too ... and it wasn't just art we were talking about. The best kind of teacher.

Definitely one of my all time favorites. I had a little direct back and forth as well with a question about Vaughn Bode. A very good friend of Jones back in the day.

These 70's illustrators totally passed me by...I remember A. thought JCJ one of the greats--I've dug much of the art I've seen, (who can't appreciate that great 70's approach to painting the female nude, all nacreous flesh and fulsome demon bush??), but it begs the question, what is the real venue for someone like this? I have this feeling they'll fade off the art landscape at some point in the not-too-distant future.

OK, maybe not fade off, (internets make anyone's work more accessible and celebrated--but it also creates a much denser forest in which to find them, and separates them from their cultural moment, so that you're now comparing JCJ with real pre-raphealites on the one hand, and contemporary figure painters from Fechin to Schmitt[sp?], et al on the other...), but the work seems a little (unfairly) stuck in a kind of retro/illustration ghetto, y'know what I mean?

An artist's artist, yes--appreciated by those around when he came through, but how will he fit into the pantheon? Seems like guys like Kirby and Friz maintain a better hold on both public and hi-brow imaginations because of the stories they're connected to (their "properties"). This leads to a much more easily-discerned pop-culture relevance for guys like that (Disney gave us Mickey Mouse, Mesmer=Felix, Kirby=Marvel, Friz=Fantasy, NC Wyeth=classic illustrations, McGinnis=James Bond, etc., etc.). This has to do with the way we catalog things in our minds--that list makes sense, doesn't it, as an approximation of the way our brains categorize our outside world?

With JCJ, the association is less obvious, isn't it? (for me, it's JCJ=nacreous chicks with fulsome demon b---...).

So yes: JCJ? His "brand" (and forgive me the cheap shorthand use of "brand"--I don't mean it in the commercial sense, but how does he fit into our mental file cabinet?)

Do we credit him with a Pre-Raphealite revival? I dunno. Did he ever have that much influence on our cultural moment?

Mind you, I'm not knocking the guy's art--I'm more lamenting what it takes to cross-over (no pun intended) into a higher level of general appreciation. For an illustrator/comic person, does validation require that larger pop-culture impact? Ditko & Spidey, Clowes & Ghostworld (movie), Frank Miller (validation from the movies again, w/Batman reboot, Sin City, 300, etc...)...whereas look at Mignola (even with HBoy movie), I dunno if he gets the same cultural cred as the preceding group...you see what I'm driving at?

Awesome self discussion of Jones. And since you're a lot younger, you don't have the same sort of handle I have on him. I saw all his stuff when it hit the stands.
Jones was a illustrator that really struggled. He was influenced by a ton of things that were happening around him. He collaborated with Bode and Wrightson. He was probably at his best and most consistently solid when he did the thing you do so well. Black and White brush work.
When Frazetta called him the best painter, I figure it was just Frazetta looking at him admiringly for his aesthetic aspiration. Frazetta didn't say Jones was the best storyteller, illustrator, composer, energy source or any of the things that Frazetta shades him on.
When he said Jone's is the best painter working, Frazetta's saying he'd made a completely unique niche
that's all his as a painter and no one was going to touch it.
Jone's was great but just like his gender problem, I don't think he ever fully slid into comfort on what he wanted of himself as an artist. He just got a lot closer than most.
And as far as nowadays. The divide used to be the people that could stick it out and make those damn pig bristles work putting down something beautiful with color complements, edges, composition that didn't look like a high school glee club poster. That could get hired at the main art gallery of my era, the paperback cover illustrator.
Now they're all game artists and they have undo buttons, and when they close in on Mullen type sensibilities, it all pretty much blends together.
Gnomon publishes the book you should try and look like this year. And it's often as not, a how to book.
So there won't be a lot of future Jones.