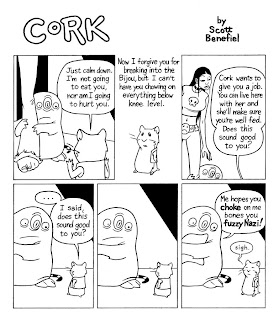 Between work, Ghost Provoking, and general life it's been hard to put out new Corks. But here's a new one anyways.

Good character interplay. Including Cork in the almost full body shot. I like that it's a tighter crop than full body and that the balloon goes off panel to an unseen Sam. Cool expression on her face as well.

Just an observation that's maybe off.
Are you doing a bit of Chris Sanders study to take you in a style direction? I like it on what I think I see in the Learning to Fly drawing.

I hope you haven't painted yourself into a corner here. It seems like these two are in a rough patch! Perhaps the robot can be an intermediary ... ;-)

I just realized that Gloot used 'I' in this comic instead of 'Me' so I just changed it. Nobody realized it though, mwa-hahaha!

I didn't want to hurt your feelings ... mwa-hahaha!!

LEARNING TO FLY:
(I wanted to add this to the long list of comments about that drawing, but concluded it would never be read.)

At first glance, I thought: "Oh, cool! Maurie has posted something!"

Then I thought: "Why would Maurie draw a little kid who, in his absolute certainty that he can fly, is jumping out of a window (and about to meet the ground in a messy way)?"

Then I saw your name & sig, and thought: "Oh. That makes sense."

Aside from a minor issue of how the lines of the (big sister's? babysitter's?) necklace intersect with the roof lines, I like both that drawing and this new Cork, very much.

I'm glad you liked the Cork!

Here's the weird thing. I don't believe it would bother me as much if it weren't for the fact that the heart looks exactly like this grasping device my brother Peter has ... it's a plastic "hand" on the end of a stick, operated by a trigger thingee at the other end. In your drawing, the roof line looks like that stick, and the "hand/heart" is trying to rip her necklace off! I dare say, though, most people (except for possibly Peter) would never think that about your drawing.

Bill calls this the Missing Tile Syndrome. He and I are both guilty of it. Just wanted you to know that I really do like your Learning to Fly drawing.

Oh, the baby sitter or sister is trying to catch him before he jumps. I thought it was a vigorous shove.

I thought it was a young mother.

It could be any of those things (except Ellis' guess which is just exceedingly cruel, but that's how Ellis' brain works). In MY pea-sized head it was a babysitter desperately trying to catch the dumb kid before he kills himself. Glad y'all like it though.