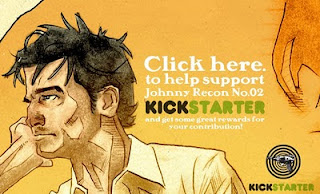 I am pursuing a unique (and fun) way to raise funds for projects. Have any of you heard of www.kickstarter.com? I did because someone sent me a blurb about a project they were trying to fund and I thought the fundraising venue itself was more cool than his project ... Check it out - here is the comics portion: http://www.kickstarter.com/projects/by/recommended?tag=comics As you can quickly see there are not as many projects going on with comics, but that's no reason not to start one (and there is even a comics cookbook that didn’t get its funding; I’m not daunted – it was more limited than mine!!).

The idea is that you have a project you need to fund, so you outline the project and put together a series of increasingly cool prizes people can get for their increasingly large donation. And that can be as imaginative as your project itself. Give a .pdf of the comic book you’re making for a modest donation, and then step it up the more someone is willing to fork over. Of course, you should make a promotional video explaining what your comic is about, fronting some of the artwork you may already have finished, etc., and, of course, asking for the $$$ right up front.

It’s kind of a crap shoot, but a lot of projects, good ones that have some universal appeal, do meet or exceed their funding goals.

Best thing is, the creator gets the money and keeps all the control of his/her comic or graphic novel.

Here is my favorite one from my project explorations: “Robin Writes A book (And You Get A Copy)” … http://www.kickstarter.com/projects/robinsloan/robin-writes-a-book-and-you-get-a-copy Check out the video and the pledge levels. Really imaginative and quite cool.

If the project runs out of time and the goal isn’t met, everything is deleted and no one is out anything. The accounting and e-transfers are handled by Amazon.com, I believe … so it is reputable, secure, and dependable.

So anyone out there who wants to step up, take out an account at www.kickstarter.com, get your idea formulated, and find an existing member who will extend you an invitation to participate (you have to be invited on board because if it wasn’t by invitation, the site would be flooded with half-baked, crackpot projects with no hope at all of getting funded).

For some of you who want to be paid to draw and publish your comic and who want to keep control of it, this might be a good way to get started.
Posted by MrGoodson2 at 4:44 PM

Sounds awesome. Once I've drained my unemployment benefits I'll look into it. Kidding. Seems like a great way to approach getting the old dream project rolling

Wow. Look at this one.

Lets keep this just between us. That link I posted, the guy had great categories for contribution levels. I think I have a new found focus. Screw job hunting. It's 5o13c time.

I'm trying to get an invite so I can raise money to give Johnny B. Gerardy for the art he's creating for the Comic Book Creators Cookbook ... Square One isn't giving a penny. Gack!!

This is one I knew about, my friends Becky and Frank are going to make a Golden Book. They've almost met their quota!