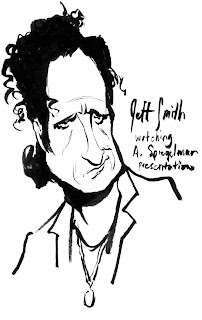 I went to the publishing world's annual convention, Book Expo America, at the LA Convention Center Wed., Fri. & Sat. Saturday morning I sat in on the "Graphic Novel Breakfast" and did some drawings, as well as listen to Jeff Smith ("Bone" man) lead a discussion among himself, Art Spielgelma, Jeff Loeb (writer for comics as well as producer on "Heroes"--and ""Teen Wolf"!), and Mike Mignola, Mr. Hellboy. The audience was primarily book publishers and book sellers and librarians (! a big presence at the conference and an ardently courted and highly active buying segment).

The cool thing that I want to share with you guys about the breakfast, (the breakfast was fun but nothing really remarkable was said, tho' Mignola fans, read the below), was the INCREDIBLE non-comics industry's interest in "Graphic Novels" (Spiegelman did a great rant against the descriptor "Graphic Novels", as did Jeff Smith with his opening remarks, "We do comics--we don't think of them as Graphic Novels!"). Comics supporters within the industry have been trying for years to get the organizers to put on a G.N. Breakfast/panel like this, and this year they finally relented, and were totally blown away with the response--a sellout with lots of people trying to get in--we're talking about maybe 500 people? It was big--and remember, these are almost all industry people, NOT a ComicCon crowd.

SO let's get with it on those Graphic Novels!!!

ALSO, surveying the wares on offer on the convention floor, a lot of these G.N.'s are crap. We can do much better stuff!

And Mignola said the only thing he's ever wanted to do, and the only thing he still wants to do, is make comics--he didn't come up with a character named "Hellboy" because he was looking for movie deals and mainstream success. And he is now chaining himself to his drawing board and going back to writing and drawing comics full-time. 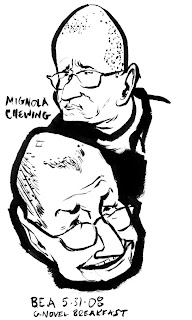 (I talked to him for a quick second afterward [I just wanted to encourage him to go back to drawing--like he needs my encouragement, sheesh--and tell him that as good as the artists are that he works with now, their art really shows up how truly great his work is in comparison. Well, how did Big Mig take this? He was agitated and itching to get away--in fact, he was starting to walk out of the room when I caught him {a big line was still waiting for autographs from Art Spiegelman and Jeff Smith, but not M.M.}]. He did say he's got a lot of non-Hellboy stories he wants to do, and he's trying to figure out the balance between sustaining H.B. and creating totally new stuff. He kind of brushed me off, which I understand, but then again, I only approached him because he was at a public speaking engagement promoting hisself and hisstuff...[maybe he's read my previous criticisms, or remembers our talk at the Con a few years back where I criticized the HB Movie!] OK, there, that's all my "Comics Journal" reporting for this post.)
Posted by MrGoodson2 at 11:34 AM

Thanks for sharing this.... yes, both G.N.s (and webcomics) are 90% crap and I know that the TAG folks could do great things in these realms. It's encouraging to see that the book sellers and libraries are picking up on this. All books stores now have a G.N. section, as well as a Manga section... I can only presume that these items are selling well.

Also, I see at our own Redwood City public library prominently displays a G.N. section beside the "new Teen novel" section. The G.N. section has both Manga and US produced G.N.s.

I'm also happy to hear that Mignola is devoting himself to comics again. I think Dave Stevens' big mistake was abandoning comics when the Rocketeer movie was being made. I think it's important that the life of a "franchise" is that it maintains some visibility in its core marketplace. The challenge is that the more personal the project (like Rocketeer or Hellboy) the more difficult it is to hand off to someone else and maintain what is popular about the stories and characters in the first place.

I think Mignola has been doing brilliant keeping his universe viable with hand offs to artists with mignolalike sensibility. Marty, grreat post. All of Tag should assay GNs at some time or rather. See you at Cocos.

Marty, maybe Mignolas attitude could be explained by him seeing your sketch. Kidding. Good resemblance. He looks a lot like cousin Ronnie.
I've noticed that Mignola saves all his enthusiasm for fellow comics professionals. So don't feel badly slighted. He has to know your work. Buncake would get a backrub from him.

Glad you guys liked the post. I should add that Jeff Smith seemed really cool (as did all the panelist, esp. Jeff Loeb, the one who does the most in Ho'wood), and I didn't mean to make him look like a wanker in my drawing.

Great post Marty,
I understand that Mignola has a reputation for being a little cranky, not that he isn't a basically nice guy and great artist. I've talked to him a couple of times. (Maybe he was on his way to the bathroom.)