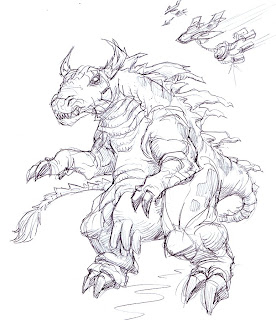 So the other day at the office I was discussing Godzilla: Final Wars with a colleague. In the film a giant lobster monster is defeated by a group of super powered mutants. Quite naturally, the conversation turned to the thought of all of this amazing lobster meat waiting to be eaten. I was concerned that they may not have enough butter to dip the succulent crustacean flesh into… I speculated that the great minds at Toho would come up with a giant cow to generate all of that butter. How do you make a cow of such an enormous size? The same way you make anything big in a Toho film… use Godzilla DNA!
Posted by MrGoodson2 at 10:04 AM

Cheese! That monster udder is dairy scary; makes my stomach churn. A butter concept I haven't seen in a while!

Oh boy, you milked that one for everything it's worth! I think you're spreading it on pretty thick.

I just skimmed the surface. I kowtow to your supreme concepting talent. No bull.

Chewing my cud thinking about it. All my ideas pail against you two.

Great Creature idea. For the first time as a long time fan of Giant Japanese Monsters, I'm thinking about the problem of giant monster poop.

Now that's funny Ellis. Of course that would be a problem. Why hasn't anybody thought about that before?

Of course they have... haven't you've ever heard of radioactive waste?

Is that good or bad?