OK, hopefully this serves as much for me to keep track of what I'm teaching as an entertaining (and maybe even useful?) aside for the T.A.G. faithful.

I started things by trying to define a bit of the mechanics of form that make comics unique. Firstly, on "closure," which we are defining as that mental leap the reader makes between two panels. It is the magic of seeing two separate images and linking them to create a continuous action or story....(images and concepts from Scott McCloud's Understanding Comics) 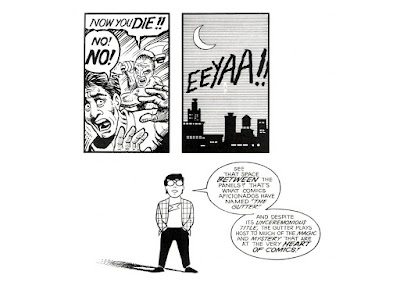 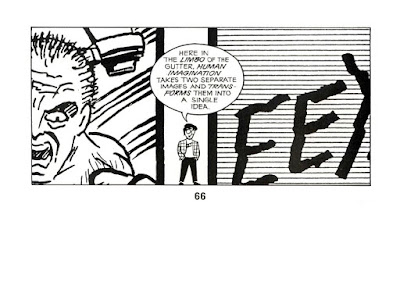 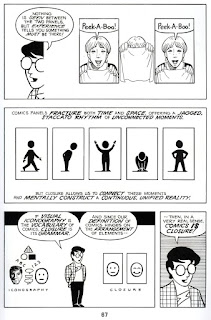 I ended the class (five hours later) with the other half of this formula: the concept of elapsed time within a panel. Started by putting a question to the class, "How would you define a single panel in a comic?" And just like I'd hoped, they took the bait and said, "It represents a single moment" (haha! suckers!).

Of course, this is what I thought, too--before reading McCloud.

The McCloud example of this is so glorious--it made a profound impression on me. So I shared it with class. 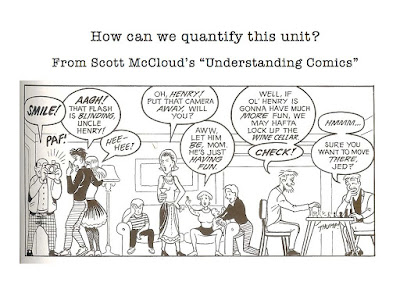 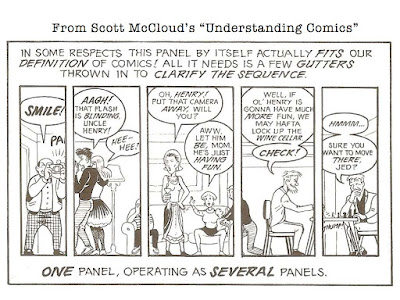 So important is this concept to me, I assigned it as homework. I asked the students to create their own time-lapse single panel--with themselves as a character. Those are the only two rules--you must have yourself as a character, and you must show the passage of time in a single image--no limits on style, content, etc. Don't even have to use dialogue. I asked the students to make (at least) four thumbnails for this and then pencil the panel on bristol; next class we will work on inking it.

But what is the overarching goal of this class, you ask? I put it thusly: 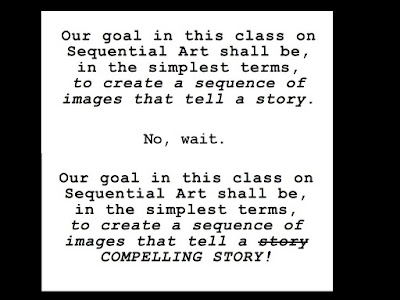 Led into this by reading aloud a bit from McKee's STORY, "The decline of story."
I talked about materials, and attempted to demonstrate the different types of ink delivery devices (crowquill, brush [with a proper W&N Series 7, to boot, tho' I told 'em don't worry about buying one of these if $ is an issue], and a brush pen [going with the Kuretake No. 14 on the rec. of Mr. Batton Lash--it's dang good!]).

My demo was a rather ambitious full-page layout of an invented Thor story--I asked the class who they wanted to see and a girl mentioned the Asgardian and I said, "Guard yr asses, then!"* and tried to lay this out on a rough piece of regular paper as a semi-full-sized thumbnail with the plan that I would then redraw it on a sheet of bristol, but like all demos, after about two minutes I began feeling the time pressure (this was supposed to be a demo of the materials, after all--not my inner Kirby) so I just inked a few figures over my very ruff layout on the very ruff paper with predictably appalling results. The only good idea I had was to make the "heavy" one of those ubiquitous late 60's smooth hippies Marvel was so good at doing (more of an Adams or Buscema thing than Kirby). 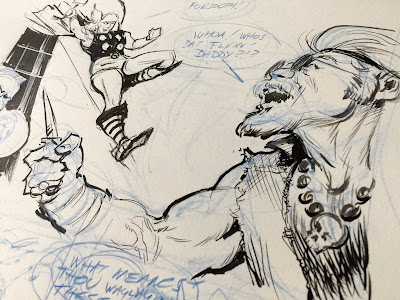 At the time I thought it funny.

I talked about storyboards, too. The class is called "Sequential Art" and when they first floated the idea of me teaching such a thing, I thought it was just their fancy way of saying "storyboards." It was close'ish to the onset of class when they contacted me to say no, it's a class on comics--and I wrote up a syllabus, etc., based on that, only to find a week or so before class that the catalog describes the class as both comics and storyboards. Almost half my students signed up expecting a storyboard course. Oy, vey.

With regard to 'boards and "closure" I said: 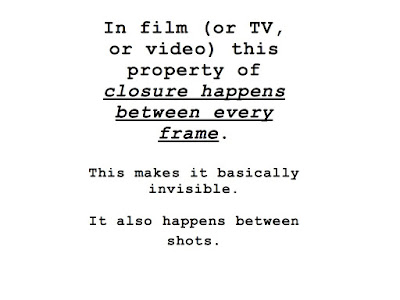 To let them wrassle a bit with this difference between 'boards and comix, I had us look at a passage of "Lil' Merperson" boards.... 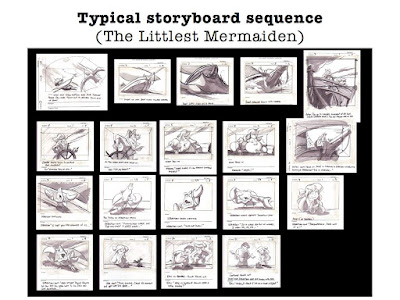 ...and then handed out some blank paper (it was the first day after all), and asked everybody to convert this section of story into a single page of comic book storytelling.

I showed 'em how awkward and uninspired it would look to merely copy the 'boards and plug them into a page-sized format. 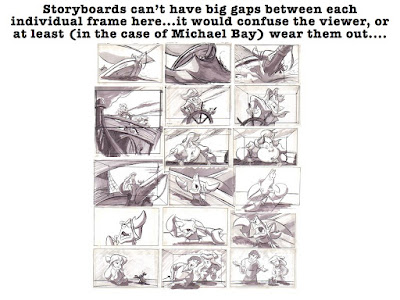 But  most everybody just copied some of these frames and jammed 'em into a six or nine panel page.

The other thing I talked about were our large-scale projects for the semester. I came up with four. I will share those with you in another post (this is taking up too much room).

The materials are great. I think you are onto the most important part of comic storytelling. To get people engaged you have to depend on people to make leaps with you. Do a better job of imagining than if you showed everything.

Interesting that you are also going into the deep stuff with Story by McKee.

Point out to them that their misunderstanding of the first assignment is a common problem with board artists. They don't read close enough to do the story on paper, they start on the one they form in their head with a first inattentive read.

The Thor and Hippie are great. Of course I already know about it from Tumblr. Freaked out hippies were always great, pc safe bad guys.

(Autocorrect wants to turn you into 'Eli')

Your praise for my pedagogic stamina is flattering--and let me up the stakes by saying the class is more like 6 hours of instruction. 9:00 AM to 3:45 PM with an hour for lunch (I said 5 hours in the post 'cuz it took me a while with roll call and introductions to get to that first lesson).

It does make for a long day.

Yeah, the hippies of that era in comics were great!

The whole "closure" concept is very interesting...I agree, we can always use more of that in our work.

I'll post on our bigger projects next....glad you are liking this! Always good to take a moment to contemplate the art form.

Thanks for archiving these lesson materials here.

Honest to God, I do not get the homework assignment.

Don't feel bad. At best my eyes glaze at McCloud. At worst, "It's a F---ing gutter you pompous d--kwad!" Maybe it's because I received his book as a gift when recovering from surgery. No reflection on you. The demo and materials part sounds great.

I feel terrible that I may make you second guess your work. Way more work than I've done or will ever do. So I reread your post. I still don't get your assignment!!
It's a 3 day weekend. I will break out my (&*&^@#ing) McCloud and read it.

Ben! Dude, you are cracking me up!

All I'm saying is create a single panel that shows an appreciable lapse of time in the same way that McCloud's example does.

I normally don't go in for too much of the syntactical, semantical approach. But I thought McCloud broke it down nicely in a way that helps me better appreciate the mechanics...and the magic!

The students probably feel the same as you.

Personally I love McCloud. Your negative reaction to him is interesting though Ben. I think some people learn best with the kind of intellectual breaking down of ideas he practices. Others prefer a more intuitive approach. Thanks for posting this Marty. It's great!

I like Ben's reaction too. But I do think it might have to do with the brain transplant surgery. When he became Evil Ben.