Treated Self to Comic Store 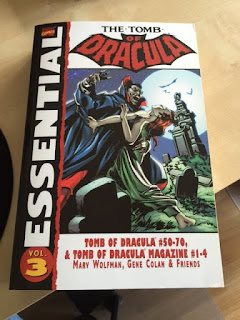 I treated myself to the comic book store today.  It's called the Comic Cave, and it really was a cave.  It was not a big place and every bit of wall space was covered with statues of one type or another... comic characters, movie characters, TV characters, etc.  There were 6 or 7 spinning racks with trade paperbacks and one spinning rack with new comics.  All US comics.  The store mark-up was $1= €1.20... not cheap, but I don't begrudge the store wanting to make a bit of money off of the book (1 Euro and 1 Dollar are almost at the same value right now).  It was pretty clear that the guy's main business are the statues.  The owner is probably a bit younger than me, but still knowledgable about US comics and comic creators.  I'll probalby go back some day soon.
When I was a kid the "weird adventure" (horror) comics were all the rage.  I collected House of Secrets, Ghosts, Plop!, The Witching Hour and Werewolf by Night.  I was aware of Tomb of Dracula, but Colan's art didn't appeal to me at that age.  Now I find it pretty wonderful, and I think Tom Palmer is Colan's best inker.  I've always liked Marv Wolfman's story telling, so this should be a fun read.
Posted by MrGoodson2 at 6:11 AM

Got any real weird cool Euro publishing efforts that excite you to see.?

Well, this shop was all US comics, but I was in a book store in Rome with Euro comics... they were mostly amazing looking. I'm sure there are places here where I could get Euro comics as well, but I haven't sought them out yet. To tell you the truth, there are probably too pricy for my blood. I don't want to spend 20 Euro on a comic I can't even read.

So you're right in the heart of Germany and all US comics is a norm? That's wild. And the market is Germans?

No doubt there are European comics available in Hamburg... I just haven't sought them out because I know that they are expensive. I imagine that most of the clientele is German, but there's probably a lot of ex pats from the UK, the US and elsewhere that enjoy these comics. We have Germans and others in our office who are familiar with the big comic story lines for Marvel and DC over the past 10 years, so it seems like these comics have pretty good market penetration in these parts.

WE ARE SO JEALOUS. EVEN ALL-AMERICAN ELLIS.

Which sparks the thought: how un-believably fun would it be to do a TAG trip abroad????

These comics always terrified me as a child. I remember particularly the Power Records "Werewolf" comic/record, partic'ly the cover: the look of terror on the (hiply clean-cut and sort of what I hoped I'd look like when I became a full-blown) young man's face at the realization that he was changing INTO A WEREWOLF.

It really disturbed me on some primal level.

But yeah, these comics look so great and read a so powerfully "adult" even without t&a or explicit sex.

Ha! I looked up your Power Records Werewolf comic/record... it's an amalgamation of some of the Werewolf by Night (Ploog!) and Tomb of Dracula (Colan!) comics. Pretty badly done, too... it's obvious where they changed the writing to mash it all together.