Gotta a lot of work yet. Wish I had shot a lot different. But I think I can make it work. 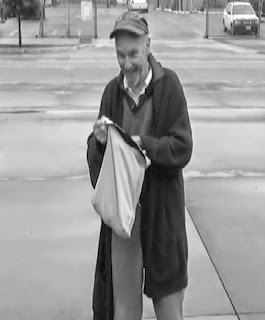 The last rough Cut before it gets After Effects spruce up.
Should be about this length. Cuts will be tidied. I'm cutting with Quicktime Pro which does a good job but has a micro glitch problem. 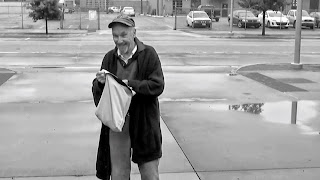 All finished. Shot yesterday. All edited and finished and on youtube the next day.
I want to do more.
I need better this-and-that if I want polish.
Not bad for what it is.

Here’s the message I sent the guys that worked on it with me.

“Don’t worry. This is totally me jockeying the rough elements into position. Filtering and size distortion are not going to be like this. I’ll go back to the color cut as I edit some extra into it before I re-export. But you can tell we managed to get something that will be fun with a little massage. I’ll add more Chris reaction cuts. Some end paper, probably a freeze on John. Lots of soundtrack work.
Figure out some graphic title trickery to begin it. Maybe white for as long as the title takes, road noise, then fade in from white. It’s fun. Oh yes. It could be better. Very worthwhile to make sure the shots have appeal before you turn the camera on. We need to do the next one with a lot of shot planning. Especially for mating cuts. DL can direct that one since it’s in his house. More tomorrow.
https://www.youtube.com/watch?v=Axl6GWALy1Q&feature=youtu.be “

Ellis! That's so great that you did this. It sounds like you are having a terrific time playing with the medium. What a hoot! Hey, do you still have that chin puppet movie you did ages ago? I'd love to see it again.

It is probably on a DVD Tom. I'll recapture and put it on youtube when I'm done with this

Holy Jehoshaphat, that is some wild one minute!

I like that it's b&w--but you're going to make it color? Do you know about the tricK of shooting with a yellow (or orange) filter when doing b&w? Makes flesh look better and gives good contrast. I love the real "comedian's" take yr hobo Gregoire does when the friend blows past him (and drops change in his bag?). Very funny.

Big struggle to get it done. I was just wrong thinking that after effects was going to be a good editing program. I should know better. IMovie was worthless. Exported awful compression, artifact filled video. I stuck with Quicktime pro. And the program that saved me was storyboard pro. Those toon boom people put out and easy to use, versatile product. It was the only way I could do the sound edits. I need Premiere or Final Cut.

Marty. I didn't know that about filters. It's just luck this little thing was doable. Scott contributed a camera that was good enough. We almost lucked into getting enough coverage. All this trouble for a 1.5 minute film. But I dig editing. I wish I was still in the game industry where all the artists have 1000s of dollars worth of pirated adobe product up for grabs.

Do you want any suggestions on this?

:15 the "looks at watch" cut doesn't read very well. Maybe stay longer on the initial shot (from front) when he looks at his watch--let us see him look at his watch for a beat, THEN cut to over the shoulder--the action gets lost in the cut--we can't see the watch from behind or parse the gesture--also ask yourself, why cut to over the shoulder? Is it to set up his POV toward the street? To show him looking up from watch expecting to see something (HIS RIDE) appear, and instead see nothing?) To my mind the over the shoulder cut would work best if you could have the hobo entering the frame as he is looking at watch (his dark silhouette remaining relatively still is a great framing device for movement on screen of hobo).

:15 This over-the-shoulder POV of street is enough to establish that view--I might drop the true POV shot of an empty street that follows this at :17--it becomes unnecessary and even a little confusing, maybe?

:23 dunno about this MedCU here--maybe save it for later? Overall for this passage: speed up the time it takes to get the Hobo in frame and interacting.

:28 you are clearly splicing one take of the hobo entering frame and inserting protag POV from :23 to :28--but this throws timing--we can pick up it's the same location of hobo from last cut, as if he froze while those 5 seconds elapsed. When you cut back have the hobo 5 sec's or so forward in the scene so the time lapse is believable (tho' to my eye the protog reverse shot is so bland I would skip it here and just go straight ahead with the hobo).

:29 long shot of Hobo interaction with 1st pedestrian is golden--love it. You could maybe go to your MedCU of yr protagonist after this? And maybe give the protag. a little more feeling of a reaction to the hobo's appearance on the sidewalk--let us (the viewer) know he's seen the hobo?
Also--is it me or does the protag's gaze seem off from the hobo's location in space--e.g., protag should be looking at a 45 degree angle from building's facade as hobo comes across driveway opening--instead he seems to be looking straight ahead, and he looks so blank I begin to think he's not watching hobo at all?

:42 Great charm in the protag's pal slapping him on shoulder and saying "Have a good day"--maybe cut from this shot abut a second or more earlier, and start following shot of him walking up to hobo almost a second later (he can be much further into the frame on the cut, which helps orient us viewers)

ALSO: the reaxn of protag to his pal coming up behind him and push him is GOLDEN. Very beliebvable acting. Love their interaction.

:55 Brush off is hilarious.

1:08 this shot is confusing--Hobo looks relatively close to where protag is standing--but then at 1:10 we cut back to him and becuase of change in zoom level he seems much further away. Either med. shot @ 1:08 should be tighter (and preferably from a distinct camera angle to further emphasize it--wither a lower or higher vantage than the rest of this seq, maybe?), or shot should be dropped--as is it gets confusing.

1:20 Elz! Oh, man! Why did you have the protag turn 180 degrees from direction he was facing?? I got so confused on this shot. It's not a violation of the traditional 180 degree rule--it's just a violation of spatial relationships. How can the protag AND Hobo (who is holding the bag, afterall) spin 180 degrees in 1/30 of a second? This hurts this big moment.

SECONDARY NOTE: I wish you had more "business" of Hobo getting physicall close to protag, getting into his space, protag trying to wriggle away, finally looking in bag--THEN cut to the horror reaxn shot?

Lots of fun stuff in here. Love it in b&w, hope you get that for the final. Not really scary, but the weirdness is there, it just needs to be nurtured.

Congrats a-go-go for doing. Takes a lot of work and gumption!!

Just watched finsihed version--much improved!! So cool that you did this. Really has some fun stuff in it. Like the opening shot much better with the refinements, and like that you sped things up a bit more. But maybe that's just the music! Great job splicing in soundtrack, sfx, voices, etc. Very nice!!

I've been reluctant to ask this Ellis - Could you explain the "first wife" joke to me? I'm afraid I don't get it. :(

The first wife joke is something that might be regional. Referring to the only wife you've had as the first wife. Like obviously there will be more to come. That was just your starter model. Now you've got the hang of it.
It's my favorite part. The guys are good friends and the chemistry of one guy being an asshole and the other guy being tired of him. They did it three times. This seemed like the best. Even with the poor capture of the actors in the frame. Now I'll read all of Marty's comments and respond to those.

Marty. I think I reacted to a lot of the same bad stuff you were reacting to. You're right about some jarring cuts. I need to work on being a better photographer in general. I'm glad you like that bit of acting. Like I told Tom, it's my favorite part. Dave is DL Nelson that is the main linking , intro voice on those podcasts. We're going to do another short that I wrote at DL or Dave's house.
Guy is shown snoozing watching TV, something mellow, he starts to snooze, fade to him wakened by the TV blaring way too loud. He slaps around the area, can't find the remote. Then the bar comes up on the TV and the volume slides down in level. Then a tap. A hand outside his den window has the remote. Dave's TV room will be perfect for the short.

Here’s Better Than Fiction Podcast 68 where we discuss the short before we shoot it.

It's interesting to do a rough edit, know the big pieces are in place but realize the real work is just starting. Quicktime Pro is a fun tool. And pretty cheap. Definitely up for at least 70 percent of most edit chores. Not soundtrack work though. Which is some of the most aggravating of the challenges.

Exciting! I look forward to seeing more! I did some super 8 movie making when I was in high school (just like those kids in the movie Super 8). We had a BLAST doing it. I'm sure you guys had a great time as well. Now I need to go listen to the podcast.
As always Ellis, this for sharing! You should tap Tom Racine for editing and sound advice... he's a pro at this sort of stuff.