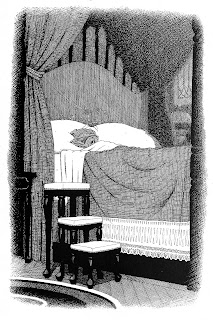 Whatever your opinion is of the long-running, supremely polarizing and finally completed Cerebus, you cannot overlook the artistic contributions of Gerhard, Dave Sim's amazing background artist. The first time I read Cerebus, (in college in the early 90s) I was absolutely floored by the background art...those crazy, intricate backgrounds completely grounded the story of the grey pig with a sword with a solid, sinister reality. I wondered what kind of artist could produce such incredible work with such consistency for a monthly comic. It was the first time a comic truly felt 'alternative' to me (in the right sense of the word) and hinted at what was possible using just black and white and shades of grey. It was probably my first real 'adult' comic obsession, mainly because I just wanted to see more of the art.

I find it hard to believe that Cerebus has been over now for nearly a decade. Didn't seem like that story was ever going to end (and in truth, it lost me somewhere in the mid-90s), but it wrapped up in 2004 and Sim and Gerhard have moved on. Thought you all might enjoy an interview with the artist-with-one-name so I put a link to an interview and to his website/blog.

Hard to believe that is started out as a Conan parody.

Thanks for the links Ronnie. He's like Wrightson. A guy that completely understands painting when he's painting in ink lines. They are paintings. He's basically Hal Foster with Hal being the wiser in technique and learning a look that didn't overwork the subject.
I think pot is probably important to the density of these backgrounds.,

Ronnie, this is such a great post. Very interesting to hear yr thoughts on reading Cerebus.

And re: Gerhard: I had no idea a different guy did the backgrounds! They do look incredible.

I like what you're saying about the "Alternative Comic" scene...it's a bit like punk rock in that, in the beginning, the label was only meant to lump together a group of super-diverse offerings whose only common thread was being ANTI-mainstream. Anything goes. Then a "style"--or worse yet, a mindset--emerges, and everything gets put into new boxes....

I'm gonna read the interview. I never read Cerebus--never really aware of it except for an appearance of the character in a Spawn (?) story--a book (Spawn) I only had shoved into my lap because I was animating the PS1 game. The story took a really strident tone toward authors who didn't own their own work (an image of Kirby, Ditko, et al in some kind of underworld prison)(by underworld I mean HELL)....

Anyway, now I "know" D. Sim thru "Glamour Puss," a comic he put out recently (its 26 issue run ended last year). Worth a look. It carried a running story on the "mysterious" death of comic (and brush inking) great Alex Raymond, who met his fate at the wheel of rival artist Stan Drake's Corvette. Some really fun stuff in the story. Great appreciation of the rival artist Drake, who penciled (and inked) "The Heart of Juliet Jones," a very well-drawn newspaper strip in the 50-60's. Sim's insights into the work of both Drake and Raymond is great to read. Lots of terrific stuff, with lots of loving re-renderings of their best imagery.

The whole thing is supposed to be getting bound into a single volume at some point...but who knows when.

Anyhoo, thanks for this!

Here's a link to one of the "Glamourpuss" panels in the Stan Drake/Alex Raymond story
http://cdn.bleedingcool.net/wp-content/uploads/2013/07/cerebus_archive_15_stan_drake_studios3.jpg?f6a06b

Wait, I need to figure how to do the hot links in my comments like Ellis...

Hey. Looking forward to that Glamourpuss trade book. I followed about 7 of those. I'll check out the Drake - Raymond link. One way to get that code for links. Make a new post and use the link button while in HTML mode vs Compose mode. Here's the code but imagine it being bracketed with arrows that point out instead of into the code. I have to change the arrows to show you the code.
[[>a href="http://cdn.bleedingcool.net/wp-content/uploads/2013/07/cerebus_archive_15_stan_drake_studios3.jpg?f6a06b">Glamourpuss" panels in the Stan Drake/Alex Raymond storyGlamourpuss panels in the Stan Drake/Alex Raymond story

I turned the arrow brackets around to add a link that worked.
Putting some effort into showing you that code and doing a link. It migrates out and messes me up. I've added some extra brackets around the code.

Weird. Doing too much at once I guess. Here's the code without the attempt at making the link.

The code. See where the parts go by looking at the other post.

Arrow brackets at the ends need to be pointing out not in.

Thanks, El! I knew you'd come thru.