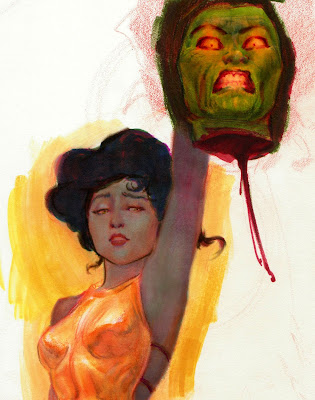 This for a revise of that "Monsters & Dames" page I did for Emerald City Comic Con. Redoing the girl as a more beautiful, more Gibson-y type (the original came out too ugly!). Want to improve the whole thing so I can make some prints.

I will have my mythologically-themed turn-of-the-Century girls, Jimmy will have his Maleficent girls, and we will be raking in the bucks come Comics Fest!!

UPDATE: Here's a snap of the rest o' the piece in progress--gives an idea of what I "start" with (after drawing it all on paper and scanning it in). Girl above has already been saturated, contrasted. leveled, etc.. This one below is raw. You can see how the felt-tip marker stuff comes in very un-saturated...also, the drawing is too big to scan in one shot, so I have to do it in a bunch of pieces (this image has five different scans involved,  4 of 'em visible here--and that's not including the girl/Gorgon image at the top of this post, which was drawn larger on a different page and scanned seperately). 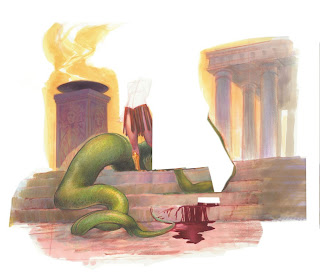 I'm not only gonna splice together the different scans, I will also create distinct objects from them, (eg., the Gorgon tail and the smoking brazier with plinth are already single pieces, and I'm currently working on making the stairs a single object/layer...). I like working this way--let's me work a little looser knowing I can line things up in PhoSho and rearrange/tweak placement as needed, (fer instance, the temple got wonky in the markers [you start to blend a buncha' colors and straights start to squirm like y're working in watercolor], but I'll shore it up in the computer).

Once I've got all these "objects" sorted, I will do my levels/contrast/saturation, then integrate in the original image I did fer "Monsters & Dames." Then I'll start marrying things I liked in the old image with things in the new.

Probably you guys have better/more efficient ways of tackling jobs like this. I would be interested to hear them!

I guess the best process would be just to draw the thing perfectly and have it photographed/scanned in one piece. Sadly, I'm not that good. But I do try to avoid "making marks" in the computer--I mean even when "healing" areas or creating new parts, I use the pen/pencil work from my source scans so that the finished image is almost totally from "hand drawn" material (I do this mainly via the cut/copy and clone tools).

Part of me bristles a little at the idea of asking a computer program to "mask" my computer-based gestures as taking place in the physical world--eg., using a mouse to "draw" a pencil line or "brush" some watercolor. Is that dumb?

But now that Tom Moon has instructed me in the art of using the "MULTIPLY" function, not only will I convert completely to digital, I will be unstoppable!

Oh yeah. Much more Gibson-y. Looks great. I like the sultry through her lashes look. That's an Amazon enjoying some legendary times.

And the great flesh tone against the extra good metal texture. Great job. I want a print if you make them.

Thanks dudes! It's felt tip marker with orange pencil! Definitely need to rely on PhoSho to get the saturation/values right when you go this route....

Looks great! This reminds me of an O'Neil drawing for Land of Oz... there was a character who had a collection of Gibson Girl style heads that she could switch out for her own as she saw fit. Baum was one weird dude.

There is no right way to do things in photoshop. Learn new stuff and adapt or discard.

Photoshop has a ton of hot keys I don't use. I could care less about being blindingly fast selecting tools, modes, levels, actions, blah blah.
If I know the window to pull down , me and my carpals are happy.

I like what you're up to.
I know what you mean about tool use. Some people instantly adapted to being digital. But they probably never fell completely in love with their "touch" on traditional media. Elmore Leonard never quit using legal pads to write. Transcribing with a typewriter. That was his comfort, his mastery.

I'm going to spend my day in photoshop doing paint intos. Looking forward to it. I'll share as I go.

What you got going looks like a Matte painters work. Figuring out where the image goes in the prearranged spot

Ellis, I hope you have a good day painting!!

Have the setting on layers be "affect all layers."

Use the smudge tool on that top layer.

Everything below that blank layer will smudge around.

Click the eye icon on that layer and confirm that the smudging is in fact only being done on that top layer. An old oil painter like you will appreciates being able to smear a couple of colors togetehr.

The two settings for the smudge brush are "finger paint" and "sample all layers" You want the latter.
I use one of the chalk brushes and set it to about 50%. They have nice smudge presets out there as well.

Thanks fer the smudge talk, El! I'll give it a try!

This is too cool. I love the sultry Gibson-girl expression.

PS is not cheating!
Either that or I'm totally cheating all the time.