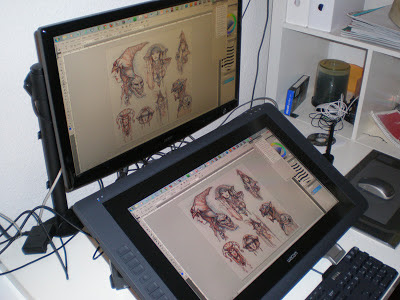 Finally OUT of the box and set up. The rest of the pics are on facebook

Congrats. Once you get it out of monitor mirror mode you're good to go.

And the arm. Forgot the arm

Cool! Don't use it for drawing at all though. Use it as an overpriced monitor instead.

There was a guy at PopCap who was more likely to use his Cintiq as a light box than as a drawing too.

There was another guy who didn't like his Cintiq... he was so accustomed to his wacom tablet that when he used a Cintiq he complained that his hand was in the way.

well, I'm going through using the stylist to manipulate the clicking. It's takes getting use to but I'm working through it. It still feels weird.

Pascal Campion has been given a ciintiq and rejected it. I like my little cintiq but I was a while becoming happy. I still prefer bringing in pencils sketch scans into photoshop. Then the cintiq is great.

The most recent thing making me happy is the final settings I've arrived at for doubling the screen interface.

I had to figure out how to get the menu items onto the upper"dead" screen while allowing the cintiq to be where I opened the file I wanted to paint into. Now that I have that spread right, I'm happy.