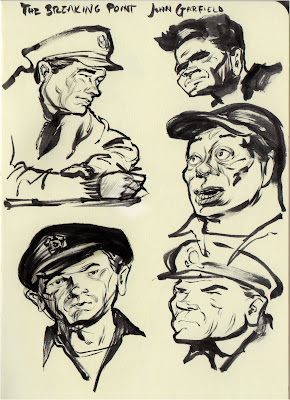 I find John Garfield hard to draw. But he was dang good in this film, which is a more faithful translation of Hemingway's "To Have and Have Not" than Hawk's version (this Garfield version also being Hem's personal fave of all the film adaptations of his books--but then, he might've just been playing irascible because this film got stuffed on release on account of Garfield getting smeared by HUAC.).

It was a dang good movie. Garfield captures the stress of down-n-out like nobody's business.

I assume this is Netflix Streaming because I saw it about 6 months ago. Good flick. Now I have to check the credits. I have in my mind Brian Keith or Eddie Albert as the guy doing cut throat, rip off business with the rebels. I'll go with Eddie Albert. I'm thinking of Keith for a BW cowboy movie with Clint Walker I saw about the same time.
New tab knowledge....
Ha! No, I was thinking of ANOTHER Have Have Not version with Audie Murphy and Eddie Albert. The Gun Runners.
Now I have to check out Breaking Point. Sounds like they simplify things. The synopsis says their just crooks on the lam, no gun running.

Great sketches of Garfield. You capture a likeness even when you get the proportions cartoony. Very pleasing.
I think I've seen the Breaking Point. Because I remember something with Harry Morgan being a creep. But that might be a memory from an early Jack Webb movie where Webb is Post Office Cop. Wait a moment, it was Alan Ladd that was the cop. Webb was a hood. I have Movie Tourette Syndrome!

Well, you must have caught this on TCM. It's not on Netflix and it's not in the library. TCM does some great stuff that way. I got a letterbox, clean print copy of Rocketship X-M because someone was industrious enough to sell bootleg copies of the great looking TCM broadcast.

I agree with you--great that TCM zeroes in on flicks one can't otherwise find.

Not that it's unavailable, but I just watched the original silent version of "The Unholy Three" with Lon Chaney, and damn, that is one entertaining movie! Came away with the feeling the Cohen Bros. should've remade that one instead of "The Ladykillers." Chaney and Tod Browning did remake it in '30--Chaney's last movie and only talkie. But the silent is fantastic. Chaney in drag as old lady looks (and acts!) so much like Steve Martin you'll freak. I wanted to do some sketches from this, but bombed it out of the DVR before I got a chance...next time.

Great characters, here. Is there every going to be a book of Marty sketches in the works?