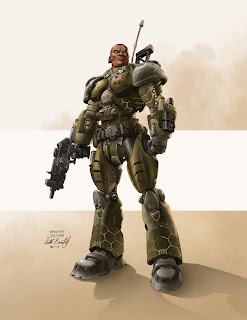 Howdy again,
Thought I'd post the results of my art try out I was asked to do by Neversoft for their character concept artist position. The Halo gig and this were occurring during the same two week period and originally I was pushing for the Neversoft one due to the promise of more stability. However the deal with 343 Industries and the project itself swayed me and I chose them before Neversoft even replied. It wouldn't have mattered anyways, they turned me down. The response I got back from the recruiter was they thought the painting was "too cartoony". Well, it would have helped to have known that before I started, maybe I could have done something a little more real for them. I also found their response amusing. It's kind of like an architect builds a three-story house, turns to the client and asks, "What do you think?" Then the client replies, "I don't like the paint." Uh... okay. How'd you like the concept guys?
Whatever, the 343 deal was a much better scenario and I ended up with the sweeter job anyways.
So, here's my painting for y'all to peruse. Attack it as you may, it's up for critique. Neversoft wanted my take on a United States infantry soldier set 50 years in the future. I decided that in the future soldiers would still be wearing pants. I went from there.
Posted by MrGoodson2 at 3:07 PM

Awesome painting Scott. Can't make heads or tails of the "too cartoony" critique. Unbelievable that they didn't hire you. What did you have to show the 343 people?

The 343 guys were sent a link to my scottbenefiel.com page where I have a bunch of storyboards posted. After that I had a phone interview with producers that went very well. They asked me if I could do a quick 5 or 6 frame storyboard exercise with the Halo characters. I didn't have to do it, I was told that they liked me anyways, but I guess it would help smooth the offer process up if I did so I drew up a three page sequence involving the Master Chief leaping atop an unsuspecting Banshee (small alien ship) in mid-flight and tossing a sticky grenade at its wingman. Ka-blooey!

Thanks for the painting comments! I thought they would have liked it too, but alas I suck monkey bollocks.

Going to show us the three page sequence as well?

Very nice. It gives me hope since I'm in the cartoony realm myself.

Better than being a monkey sucking sticky grenade bollockses (is that a plural spelled same as singular word?) ...

CONGRATULATIONS!!! And especially for not having to move. You would have melted in the rain like the W.W. of the W.

I was giving it a close look. Really nice. How many layers did the piece have?

Congrats on the new gig--that's fantastic news. Really, really glad to hear it!

Time to celebrate by commissioning that over-lifesize sculpture of Ellis's head. You know--for the drawing room.

I know what needs doing in the oversized bust department. A self portrait. Has a sculptor or painter ever really staked out his chance for immortality until he's done his own image?