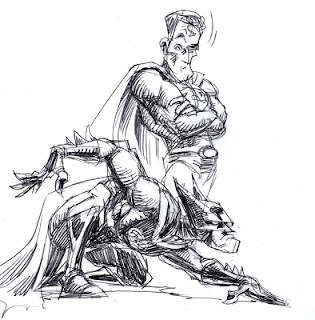 Nice posing. I like the thrust of Batman's jaw.

I like Rick's subdued Don Martin-isms in his drawings.

Don Matinisms. And Tom Carrol talking MAD. Guess what I got to see by going to CAPs about 3 months ago. Sergio Aragones showing a slide show of all the Mad Crew being taken on the Bill Gaines exotic vacations. That's how Gaines gave the crew bonuses. I got to see Don Martin at his leisure. With Jack Davis, Sergio, and others from that era.

I just broke one of the laces on my Don Martins....

The Bizzaro World books sound cool. I would happily accept one as a belated Xmas present....

A Don Martin moment: What is the sound of a prince climbing Rapunzel's hair?

I like that you're still using Weezner's cartoon of you for your ID , Ron.

His cartoons are right on. Hope to see more.