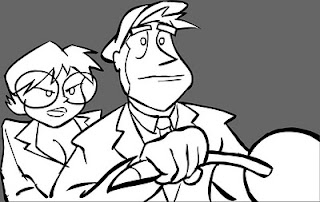 Click the Headline to see some more Flash from the project I'm working on. It has suggestive language. The Character Assfault, is trying to "seduce" the girl on the back of his motorcycle. They are being pursued by a shape shifting mass of Alien tentacles with teeth called Gigglers.

I did the art and the lip synch to this part which will be integrated with after effects into something that cuts from this shot to close ups of the characters.

I'm digging the Flash. I think I've mentioned that.

My effort on solo lip syncing so horrified MC that he sent back a document that basically I just inked over. So when you visit my site go to the main blog and see the final version. It's a LOT better than what I did. And hopefully stuck with me to some extent.
Posted by MrGoodson2 at 8:35 PM

Thanks Tom. I've sent this in and I've got a reaction that I need another pass. Not surprising since this is my first effort at lip sync animation. I'm not much of an animator in general. But I'll also post that revised pass. I'm sure it will improve and improve the animator Ellis as well.

Wow! This seems like a really ambitious project! Keep us posted!