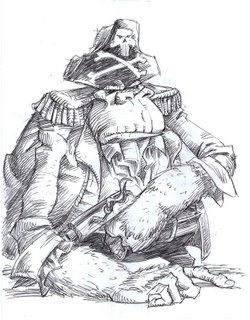 Now that E3 is behind us things are calming down at the office a bit. Therefore, I have enough time for a Tuesday drawing! If you are going be at E3 be sure to check out the Turbine booth! I won't be there but LOTRO will!

This is a character I draw from time to time. I'm not sure why, but I like him. His crew is a bunch of parrots.
Posted by MrGoodson2 at 3:24 AM

Like the Pir-illa. Or how about Capn' SilverBack. Or Bannana Beard, or Capn' Apehab, or .....

Ohhhh, I really like Capt. Silverback! This now his official name!

Yes, it's hard not to think of Ellis when one draws an ape... wait a minute, that didn't come out right...

Uh...I don't know if that came out right either...

Polly wants a banana. But not really, it's for the boss, Captain Silverback. I like this guy!

So after Tux is done, I think you should do an adventure for this guy.

I just saw Howl's Magic Castle so I'm adding a back story of a curse for the pirate that's now a gorilla. What with The new Johnny Depp pirate movie about to rule the box office shortly, I'd think about some scenarios for this guy. I dig him