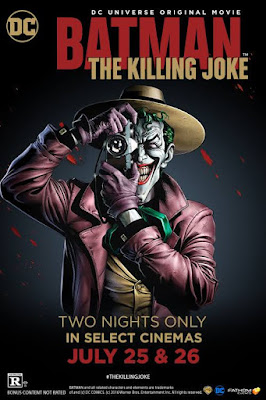 Jimmy said he liked it, so I don't want to sound like I'm stepping on his opinion, but I watched the trailer and the animation looked shockingly sub-par. Very 1990's out-sourced after-thought. Disappointing!

And from what I know of the plot, and the graphic novel it was based on, I know it's not for me.

But I hope everyone who wanted to enjoy it, did!

The part that was from the book.....they front loaded some Batgirl stuff in the beginning to flesh it out but that dragged it down. And the animation was good but they came nowhere near the feeling you get from Brian Bolland's artwork in the book. Many so far don't like it. It was nice to see on the BIG screen regardless.

Tonight is Planet of the Apes on the BIG screen

Believe it or not. I've never read The Killing Joke.

It's being sent to me by the library