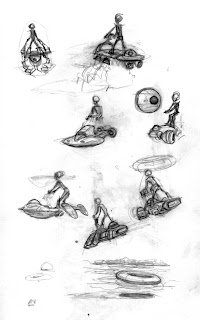 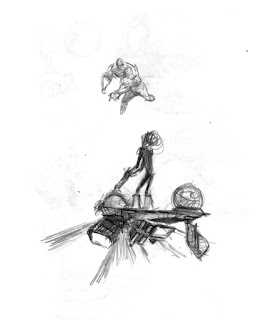 Mega Mind sketchbook. Had to re scan a bunch of stuff. Lost a hard drive that had the previous record. Had some animated gifs I lost. I like the super rough stuff. Hope to have some illustrator work I'm doing to show shortly. I've got a Flash sample storyboarded. Inspired by library DVD, Johnny Weissmuller, RKO Tarzans recently viewed.
Posted by MrGoodson2 at 10:20 AM

The Weismuller RKO Tarzans had the one bad thing in common. They mark the end of Maureen O'Sullivan as Jane.

But they had some wacky, RKO serial adventure flights of fantasy that made them worthwhile. Tarzan's Desert Mystery had incredible stuff going on at the end. Some weird spot in Africa where a fever medicine plant grows. Also contains gigantic spiders, dinosaur size komodo dragons, killer plants that wrap you up with 20 foot long twisty tie leaves. Good stuff.

Were these Mega-Mind doodles done while watching?

I remember watching some old Tarzans and the girl that played Jane was quite comely. Lots of border-line nudity and implied sex play.

This could be the next big-wave property to unseat Twilight, Hunger Games and 50 Shades...but focus on the girl's p.o.v. That way it's about her fantasy... (as opposed to targeting boys with too much sfx and explosions in the manner of John Carter).

I hope you'll do some Tarzan sketches for us.

I'm doing a 30 second thing where Tarzan bounds his way through the forest to get to a hammock and watch TV. Just to show someone can hand me a flash job and I can do it.

Mega Mind was something Heavy Iron had a toenail grip on as a contract for a short time. Dreamworks had some concurrent proof of concept going on and went with someone else.

check this guy out. Pumping me up more than i've ever pumped myself up. A lesson to be learned here. I'm following the auction. I want to see if he sells it for 8 times the amount he paid

The lesson is hire him as your agent and give him 10%.