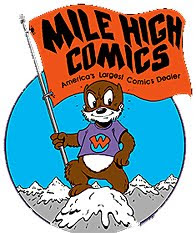 This is a two part email from Chuck at Mile High Comics.


I'll start this year's convention report by mentioning that there is a huge controversy over the decision of the convention committee to completely alter both the price, and the availability, of 4-day passes for next year's show. As I understand it, 4-day passes to this year's show were priced at $105, and were available beginning at last year's preview night. The price has risen to $175 for this 2012, with only 2400 tickets per day being made available at a specially constructed stand in the huge Hyatt hotel next door to the convention center. Pricing considerations aside, the fact that people had to line up in the Hyatt at 6 AM this morning to get next year's passes has some of the most loyal fans of the San Diego convention absolutely livid. I have become quite used to hearing from my fellow comics dealers that they believe that the members of the convention committee categorically ignore their needs, but this is the first year that I have had those same sentiments echoed by members of the general public. Never, ever, have I seen so many angry fans at this convention...

Before you get the wrong impression, I do want you to know that everyone who is at the show appears to be delighted with being here. Their resentment stems solely from the fact that many of them have been supporting the show for a decade, or even longer, and suddenly they are being denied easy access to future tickets. I certainly empathize with their anger, as we comics dealers have been forced to live with a rapidly diminishing role and importance in a convention that we helped to nurture during it's formative years. That having been said, circumstances do evolve, and the San Diego convention that exists today is a unique enterprise that draws in a worldwide audience. It is precisely that intense popularity and resulting demand for tickets that has caused 4-day passes to now sell for upwards of $500 each (!) in the online secondary market. With the convention committee well aware of that secondary market pricing, is it any wonder that they are raising their own prices, and limiting purchases of 4-day tickets to two per person? As sad as this change may be, the simple truth is that there is vastly more demand right now for tickets to the San Diego convention there there is supply. That being the case, it is almost inevitable that ticket prices would rise, and that availability would decline. Sometimes, change sucks...

Before I leave the topic of ticket availability, I do want to once again advocate for extending the length of the San Diego show. Ideally, I would like to see the convention last nine days, covering two weekends and a full week between. Based on current demand, I still see the show completely selling out in both tickets, and booths. Clearly this radical change would require some intense negotiations with the city of San Diego, and more importantly, with other users of the convention center. Huge convention facilities, such as this one, tend to be booked years in advance. Finding a double weekend combo (plus the necessary set-up and break-down days) is absolutely going to require some other users of the San Diego convention center to relinquish their previously reserved dates. Given the incredible amount of money (reportedly estimated at $178 million per year...) that comic-con attendees already bring to San Diego, however, there are enormous incentives for all parties involved to start making whatever deals are necessary to expand the length of the convention. The only real question is whether there is the leadership, and the political will and ability, to bring such a sweeping change to fruition. Barring such an expansion of the dates, I see the current conflicts over tickets and booths as only escalating, and becoming more acrimonious, next year.

The reason for my lengthy preamble is that I am going to reveal to you a primary reason for why the Board of Directors of the San Diego convention decided to jack up 4-day ticket prices for 2012 from $105 (in 2010), to $175 in 2012. Simply put, they desperately need a financial war chest to back up their full-contact negotiations with the City of San Diego. To clarify that statement, it has been widely reported in all manner of news sources over the past few years that the Board of Directors has been threatening to pull the convention out of San Diego. What has not been widely known, however, is that all this bluster has been nothing more than a huge bluff. To this point in time, there has never been a viable financial capability that would have allowed the convention to actually be able to relocate out of San Diego.

To illustrate what I mean by a lack of financial capability, consider for a moment that a great deal of the manpower for this immense convention comes from volunteers, most of whom live in the San Diego region. Expecting them to contribute their time in as generous a fashion if the convention moves to Anaheim or Las Vegas is completely unrealistic. Barring a successful push to find equally talented volunteers in whatever new host city was selected, the Board of Directors would have to hire (and pay) a novice crew completely unfamiliar with comics, and the vagaries of comics fans. Good luck.

Hiring a new workforce aside, there is the necessity of finding a facility with available dates. It has been reported that Anaheim, Las Vegas, and Los Angeles have all sought to lure Comic-Con from San Diego. But, can they provide similar levels of service as compared with San Diego? After decades of completely ignoring the convention, the city now is taking a very active role in helping with critical issues, such as public transportation. As a case in point, a new pedestrian bridge now allows fans to safely cross the very busy roadway that separates the main downtown transit center from the convention center. This has not only eliminated the very dangerous crosswalk situation that existed previously, but also encouraged everyone who lives in town to take the trolley. Traffic congestion near the convention center is thus vastly less than in the past, which is definitely a win-win for everyone.

All of the above having been said, the continuing preeminence of San Diego as the greatest pop culture/comics event in the world is now threatened not only the rapidly expanding New York Comic-Con, but also by a major new media show backed by Disney, being held in Anaheim in August. San Diego needs both more room, and additional days to be able to use in the San Diego convention center, if it wants to have any hope of remaining on top. Only the political leaders of San Diego can grant and/or facilitate either of those two wishes, however, and at least for right now no firm solutions are at hand. It is thus critical to the convention Board of Directors that they actually have the cash on hand to pick up and move, if that becomes the only option.

Returning to the news that I reported yesterday about the annoyance, piqué, and rage being felt by long-time supporters of the convention when they discovered that 4-day advance tickets for the 2012 convention were being restricted to only 2400 per day, and could only be purchased at a special booth being set up in the neighboring Hyatt hotel, the true situation turned out to be even more aggravating than I first believed. A fan who arrived at the Hyatt at 5 AM on Thursday reported to me that he was able to purchase his limit of two passes, but that the hundreds of fans who arrived shortly after 6 AM was sent home empty-handed. Larger families were also struggling to get enough tickets for themselves and their children not only from a financial perspective, but also from sheer availability due to the two ticket limit. As a direct result, I had several fans tell me yesterday that, after many years of attending the convention, that they would never return. With as much as I love this great annual gathering, hearing that bitter news makes me very, very sad.

Wow.
Makes me almost a criminal to have left my two pro badges in their non cashed in state.
They were never anything but a barcode on a 8.5 by 11 piece of paper.

So they have an over the road footbridge now! That is a huge improvement. I wish I had gone now. So I could say I remember the first year they put the bridge in.

Did they have to control it? Make it one way back and forth?

Looks impressive this Bridge. But is it truly handy for the type of traffic the Con produces. Those wanting to spear straight into downtown.
footbridge

That link to the bridge is a photo set of 9,000 photos of the Con! Amazing.
And most of them are pretty well composed. Like they've edited it down to just the good ones.
Another way I can feel like I was at the Con.

My Bad. He's only got about 3000 Con photos. If you continue to click "older" from that footbridge shot, you very soon encounter the beginning of his Anime Expo photography.
Any way. I'm grateful to the guy for all the Con shots. Got a real good look at the floor and exhibits through his eyes. He went nuts on the Sideshow Collectibles.

Interesting link, Ellis. Heard a rumor when I was there in 2008 or 2009 the con was going to leave for Vegas because the Con had grown beyond San Diego's capacity to handle it. Sure seemed that way to me at the time, because it was a zoo then and I can only imagine it's gotten worse. I guess, according to the Mile High guy, it was just a lot of talk and nothing more.

Yes , it was interesting to read this Mile High fellow's take that there was never a real threat to getting the Con out of San Diego.
The Trickster may be the most obvious evolution. Split off the comic book fan from the Hollywood media fan. It's a "take back" move that doesn't rile anyone.

At this point I would be happy to see the zoo that is the current Comic Con go to LA with all the Hollywood hoopla and celebrities. The someone could start a new Comic Con in SD that is more comics oriented.

I've been telling everyone I know that the Emerald City Comic Con in Seattle is great... it's pretty much the con that the SD con was about 10-15 years ago.