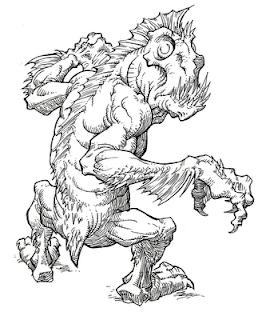 I started this guy on Monday morning and got pretty far with him as the bus ride was extra long.  Snow was coming down and brought traffic to a crawl.  Freezing temps during the day made the roads icy and I-5 was a parking lot going home.  After attempting to ride the bus home for a while and got off as the bus was headed onto the freeway and walked back to spend the night at the office.  It turned out to be a really good choice as I've heard horror stories of 5-10 commutes home (as Ronnie about that).  There was food, heat and a couch, as well as Netflix, so I watched War of the Gargantuas and slept pretty well, all things considered.
Posted by MrGoodson2 at 4:51 PM

Nice pose. I like the skull anatomy too. War of The Gargantuas would make a good backdrop for creativity

I too was struck by the pose. I love the texture of the shading too. I want to do a fish dude now.

Did any of you see Humanoids of the Deep? I think Vic Morrow was in it. Mutant/human hybrid salmon swim upstream to mate with college co-eds. A GREAT B movie...

Ah! That was a favorite to give a MST3000 treatment to... I saw it in a drive in and my buddy and I ridiculed it. We cried with laughter!

It's also memorable as the first in a long line of films that James Horner ripped off Jerry Goldsmith's film music.

Haven't seen Humanoids From The Deep in a long time. I think they've just given it a deluxe reissue. Corman commentary sort of stuff with other extras. I think you're thinking Dooug McClure. Maybe it has Vic Morrow in it as well.

I looked at a couple of clips of that movie on YouTube. Doug and Vic must have really needed the money.

It's got lots of gratuitous nudity plus it's got that Corman / New World pacing. Which is good. I'm looking forward to it hitting Netflix. Not there yet.

Oh yeah, it's pretty awful. Sort of a Jaws meets The Creature from the Black Lagoon. As I recall, the ads for it said something about the monsters coming ashore not to eat but to spawn.

I read the IMDB trivia and learned that all that nudity I'm so enamored of was added later by Corman. He fired the female director of the film because she wouldn't be a party to it.