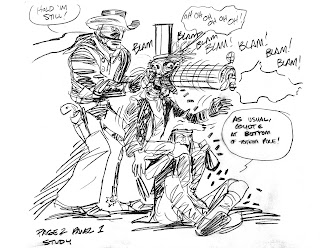 There's critical mass for getting the Gun Nose Chronicles comic book done by the 2011 Con ... this just in from Dave Garcia, the artist who was to my left on Artist's Alley at the 2010 Con. A.A. is such a melting pot and over five days Dave and I got to know one another and our work, etc., to the point that Dave suggested doing a short for the comic called "Have Gun (Nose) Will Travel" where Gun Nose shows up with Dave's characters from "Shadow of the West."

And here is the first rough, just a couple of weeks away from the show's close. Naturally, I can't spoil the ending ...

The Link is to Dave's Shadow of the West Web comic (when he has six issues done, he'll seek paper publishing). Lots of fun!
Posted by MrGoodson2 at 10:52 PM

It almost hurts thinking about having a gun for a nose. I feel every recoil.

His snuff box is full of gunpowder.

I agree with Ellis... I'm not usually a cowboy fan, but that comics is really cool!